As a bilingual speech-language pathologist, I am honored to serve culturally and linguistically diverse families daily. Through my education and experiences, I have learned so much about bilingualism and the importance of celebrating all languages around the world.

Nearly 25% of public school students now speak a language other than English at home across the U.S. Of these children, 85% were born in the United States. In Texas, almost 33% of school-age children speak another language at home and that number is projected to continued growing (Center for Immigration Studies, 2018). 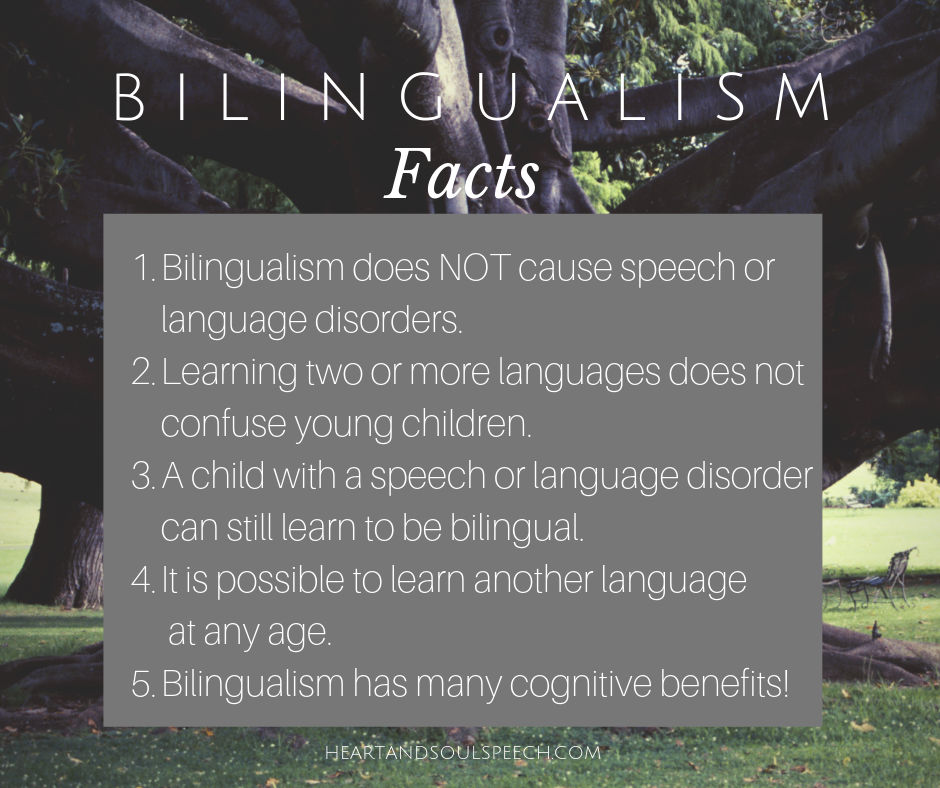 When it comes to bilingual language learners and speech disorders, I hear so many misconceptions. Here’s the FACTS you should know about language development and bilingualism!

1.   Exposing infants and toddlers to more than one language DOES NOT cause delays in the speech or language development.

“A disorder in bilinguals is not caused by bilingualism or cured by monolingualism.” (Kohnert, 2008)

If a child has a true language disorder, it will be present in BOTH languages. If a child only shows difficulty in one language, then it is a sign of emerging language and called a “language difference.”

Children learning more than one language will speak their first words around age one and be able to combine two-word phrases by age two. This is the same expectation for children learning only one language. A bilingual toddler may “code switch” or mix parts of a word/sentence from one language with parts from another language. This is a normal part of bilingual language learning. The total number of words a child uses from both languages should be within the same range as monolingual children.

2. Learning two or more languages will NOT confuse your young child.

As young children learn more than one language, they may mix up grammar rules or use words from both languages (“code switch”). Again, this is normal for bilingual language development. Usually by age 4, a bilingual child will be understood by other bilingual speakers. A monolingual child is also expected to be understood almost all of the time by age 4.

3.  A child with a speech or language disorder CAN continue to learn a second language.

If your child shows a language disorder in both languages, that does not mean you need to only teach one language. Research shows with intervention, a child can successfully use more than one language.

**If you have concerns about your bilingual child’s language development, please seek out a speech-language pathologist with bilingual experience.**

Caregivers of both bilingual and monolingual children can ask themselves the following questions to determine if there may be a language disorder or delay present:

–Is my child’s speech clear?

–Does my child make friends easily?

–Is my child comfortable communicating with friends and family?

–Can my child communicate independently?

–How often do I understand my child?

–Does my child use more gestures than words?

4.  It IS possible to become fluent in more than one language at any age.

Research supports language-learning happens most rapidly during the first years of brain development; however older children and adults can become fluent later in life with practice.

Research shows people who are bilingual use more parts of their brain during communication than those who only speak one language (Marian & Spivey, 2003), and that the brain structure itself actually changes to allow for language switching (Mohades, et al, 2012). The bilingual brain depends on executive function, the area of the brain that controls our impulse, morals, decision-making, attention, etc. (Bialystok, Craik, & Luk, 2012).