Screen Time –Is it harmful, or can it be used to help children learn and develop?

As a speech-language pathologist, my opinion is screen time can be both. Interactive media and technology can help children learn if used appropriately and intentionally, guided by an adult, and accompanied with language-rich interactions. On the other hand, using screens to replace those interactions, distract or occupy a child, or “educate” a child on its own can be harmful to their development. 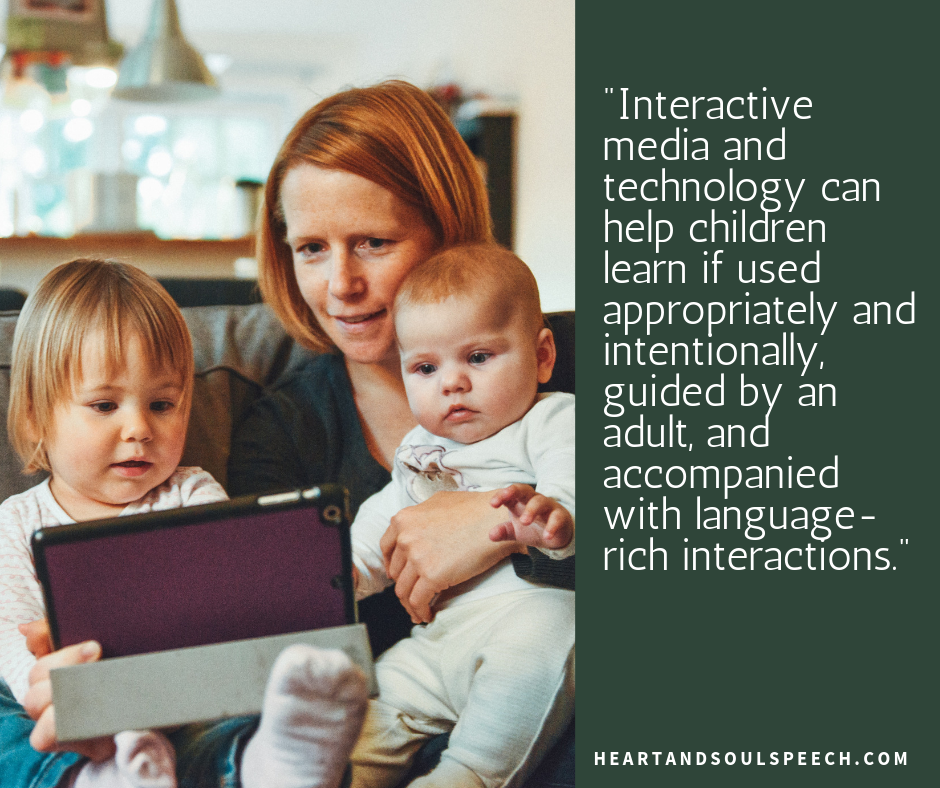 **Please note this article discusses young children using screens for entertainment, and does not include children who use devices for the purpose of communication (Augmentative and Alternative Communication/AAC device).

What children watch and how they watch it is important, maybe even more so than how often they watch. High-quality programs combined with caregiver interaction can be educational for young children. It isn’t the technology itself that builds language, but “the quality of interaction you have with each other as you explore the technology together.”  YOU are still the child’s best teacher!

Research by the American Academy of Pediatrics (AAP) indicates in the United States:
• Children under 2 years of age watch an average of 1-2 hours of television each day.
• 1/3 of children have a television in their bedroom by age 3.
• 39% of parents of young children report the television is on in their homes for at least 6 hours each day.

Is “educational media” beneficial to development in young children?

The AAP reports there is no proof that media for children younger than 2 years of age is beneficial and does not help develop language skills.

• Infants younger than 12 months cannot follow story development or dialogue on a screen yet.
• Babies as young as 6 months can imitate simple actions they see on TV and by two years old a toddler can remember brief sequences; however, more efficient for young children to learn from real-life interactions with people and objects, as compared to a screen. Children do not transfer long-lasting skills from watching television to their natural environment.
• Children younger than 2 years may only be viewing the colors, movement, and music/sounds in media, but generally do not understand the content or language used yet.

How does media use affect development in young children?

The AAP states the following ways:

Less interaction with caregivers and peers

Vocabulary growth is directly related to the amount of time adults spend speaking to young children. Toddlers who are exposed to more handheld screen time may be more likely to have delayed expressive language skills (i.e., ability to say words and sentences). One study showed for every 30-minute increase in daily handheld screen time, there was a 49% increased risk of expressive language delay.

In children under 3 years, watching television has been associated with irregular sleep schedules, decreased exercise, and can affect a child’s mood, behavior, and attention skills.

Children who spend more time using media without adult interaction are less likely to be able to read.

At risk for delayed language development

Studies suggest the more TV a child watches, the more at risk they are for language development, perhaps 6x more likely than peers who watch less television.

Concerns about cognitive and emotional development

Research is still needed to understand the effects of media use on young children, but the AAP agrees there is reason to be concerned.

Children older than 2 years of age may benefit from high-quality educational media programs. The AAP indicates children who watch these programs can now follow story development and may have positive effects on children’s learning. In general, it’s best to choose age-appropriate programs in which:

**Despite these potential benefits, television and media use cannot substitute in-person interaction and play. Research continues to show a language-enriched environment and interactions between children and caregivers are the best for children’s development.

What about media use in older children?

• The National Institutes of Health (NIH) currently has an on-going study following that points to lower scores on thinking and language tests for 9- and 10-year old children who spend more than two hours a day on screens.
• One survey of 2,000 parents of 5-12 year olds showed 3 out of 4 children often refuse to play games without some form of technology, and kids play twice as long on screens as they do playing outside.
• 4 out of 5 children ages 10-12 have a social media account (link).
• Sleep deprivation is increasing in children and teenagers due to excessive screen time. (link)
• Teenagers may spend an average of 4.5-6.5 hours a day on their phones. Studies have indicated excessive media use in teenagers may contribute to increase feelings of anxiety, loneliness, depression, and decreased professional social skills and attention.

What about when I use my electronic device in front of my child?

“Technoference” is defined by Zero to Three as “everyday interruptions to interpersonal interactions or time spent together that occur due to digital and mobile technology devices.” Caregivers are more connected to technology than ever, and research is still developing regarding the effects of our media use while with our children. However, many experts agree caregivers who frequently use mobile devices around children are missing valuable opportunities for positive social interaction and may increase negative child behaviors.

The American Academy of Pediatrics (AAP) recommends the following:

• Under age 2 years: Avoid all media use by children (television, computer games, videos, DVDs, iPad, smart phone, etc).
• Children over age 2: Only 1-2 hours per day for any screen use.
• Keep televisions and electronic handheld devices in the common living areas (not in children’s bedrooms).
• Encourage independent, free play to allow children to think creatively, problem-solve, and learn about their environment.
• Read and play together to foster cognitive and language development.
• If caregivers choose to expose their young child to media, it’s recommended they 1)Review program content before the child watches; 2) Watch the program with their child and interact during media use.

• Turn off media use before bedtime or naptime.
• Choose programs that do not have commercials or choose a DVD/video instead. Children can be vulnerable to the messages and content in commercials that may not be age-appropriate.
• Limit your own screen time around your children to increase positive interactions.
• Avoid using screens as a reward, as that only makes it more appealing to the child.
• Turn off the television in the “background.” Even if a child isn’t actively watching a show, media use in the background interrupts a child’s play and attention, may not be appropriate for a child, takes away the caregiver’s attention, and may cut down on interaction between the adult and child.

Ways to use technology to build language

• www.commonsensemedia.org – This company reviews a wide variety of apps, shows, and movies to let you know which age group they are intended for, and ranks them based on their quality and their content.
• Build vocabulary – Gone are the days where we look up definitions in the dictionary page by page. We’ve got instant access to pictures, videos, and examples of vocabulary that can help support children in learning new words.
• Describe pictures – If you’re like me, you take a hundred pictures a day or may scroll through others’ pictures often. Talking about pictures with our children allows for the interaction and targets language concepts like questions, describing words, etc.
• Talk about the television show you watch together – Ask you child what the show was about, which characters they liked or disliked, and how the characters may have felt.
• Interact with your child while using media – If listening to music, dance around, or model following the directions when a character asks.
• Ask “Alexa” questions you child is interested in, or tell her a joke.
• Connect what children see in media to real life – “Remember we saw the animals in the show? Let’s go outside to see which animals we find!”
• When the show is over, turn off the television and act out the story or sing a song together.
• Play social games, like peek-a-boo while video chatting with a friend or read a story to a family member.

If you’re looking for non-electronic toys to support speech and language development, check out our top 20 favorites!

Zero to Three, 2009. National Center for Infants, Toddlers, and Families. “Television and the Under 3 Crowd: Making Good Decisions about ‘Screen Time’ for Young Children.” www.zerotothree.org